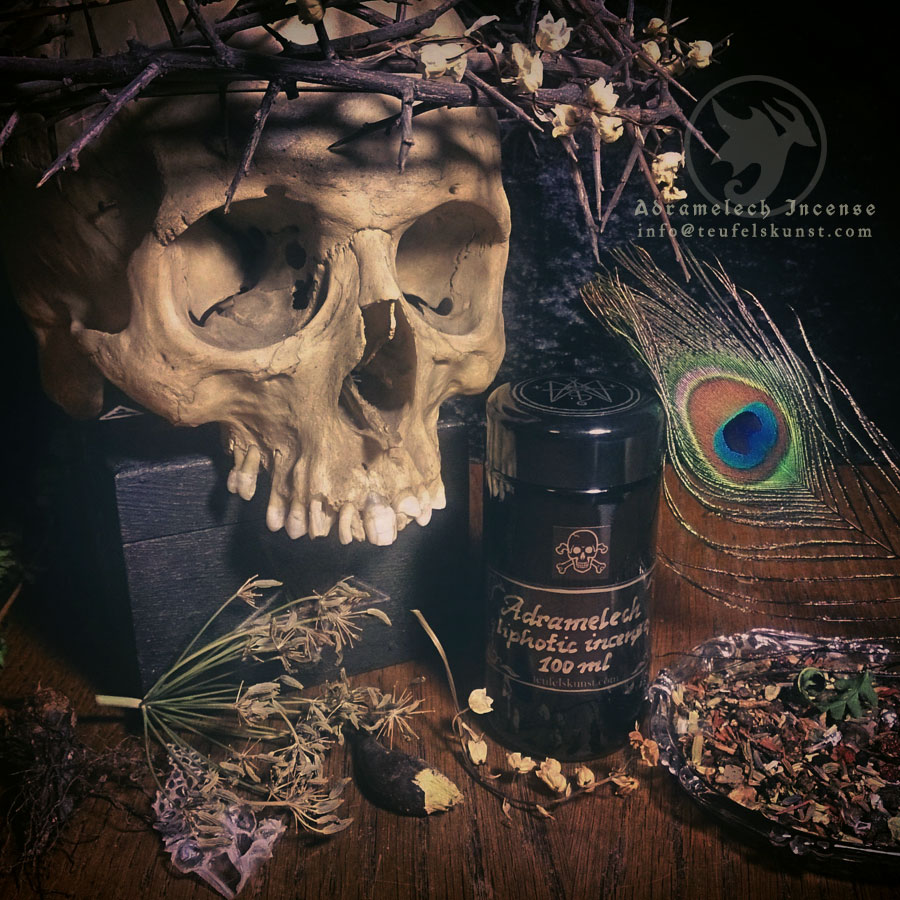 currently out of stock

Fiery within, cold without

This is the third in a series of ritual incense blends designed for working with the qliphoth (or kliffot). It is dedicated to Adramelech, the ruler of the eighth qlipha on the tree of death. The corresponding qlipha is named Samael, Hebrew סמאל, meaning “poison of god”. The qlipha and its ruler are associated with Sha’arei Maveth (or Shaarimoth), the “gates of death”, one of seven infernal habitations.

Adramelech is described as a “powerful king”. He is one of the eleven heads that govern the qliphotic pantheon. Similar to other demonized deities, Adramelech was once worshiped as a sun god. His worship later merged with that of Moloch.

In Collin de Plancy’s Dictionnaire Infernal, Adramelech is depicted as a mule with peacock feathers, evoking associations to Melek Taus, the “peacock angel” of Yazidi religion. Melek Taus is worshiped for his independence, since he refused to bow to Adam, the first created human. The story resembles that of Shaitan in the Quran. In Islam this refusal to bow to god’s creation is interpreted as a display of sinful pride. Melek Taus however, reasoned that he was made of god’s own light and could not bow to Adam, who was made of dust. Therefore god rewarded Melek Taus and made him his deputy on earth and leader of the other angels. The peacock’s appearance is sublime and likewise Melek Taus proved knowledge of the sublime in his choice. Besides this the Yazidis view the peacock as a symbol of immortality.

Samael also appears as an independent figure: for once he is described as an accuser, seducer and destroyer and a “chief of evil”. At the same time he occurs as an arch-angel, residing in the seventh heaven, as the chief angel of the fifth heaven and features as the “angel of death” in Jewish lore. In the old testament he appears as the serpent in the garden of Eden, and as a demonic entity and spouse of Lilith.

As the serpent in the garden, Samael seduces Eve to eat of the fruit from the tree of knowledge of good and evil. Similar to Prometheus, who steals the fire from the heavens and, against the will of Zeus, brings it to mankind, Samael delivers the gift of gnosis to the first humans, even though god had forbidden them to partake of it. Henceforth they are expelled from the garden, and the serpent along with them. Samael becomes the consort of Lilith and they breed demonic children.

Eve, impregnated with the seed of the serpent, begets Cain, the son of Samael. Cain slays Abel, and is exiled to wander the land of Nod. But he is protected by a mark, which his father Samael placed on him. This mark is a warning that, whoever attempts to harm Cain, will be punished sevenfold.

The different manifestations of Samael merge with the qliphotic king Adramelech. Now let us look at the planetary associations:

Adramelech’s qlipha is under the influence of Mercury. The corresponding element by the same name is a white-silvery metal, liquid at room temperature and poisonous. Early uses of mercury include the making of divinatory mirror bowls, which were found in elite Mayan tombs. Today it is employed in liquid mirror telescopes. Mercury is also called quicksilver. In alchemy it represents the “spirit” and is attributed with various transcendental properties, due to its volatile nature.

The god Mercury (Greek Hermes), is the messenger travelling between the realm of the gods and the world of humans. In his underworld manifestation, Hermes chthonios, he acts as a psychopomp, guiding the souls of the dead through the netherworld.

Of interest in connection with Adramelech and his qlipha are transcendental, transforming and empowering properties that reach beyond the realm of the living and this world. What lies beyond the reflective mirror’s surface? Which herbs help with clear sight and telling the lie from the truth? Which herbs aid in seductions and can confuse or blind an opponent? Which plants and resins assist in opening the “gates of death” and contacting and mobilizing the souls of the deceased? The incense for the work with this qlipha and its ruler is hence complex in nature. The sublime king Adramelech becomes a dark soul-guide, residing beyond the gates of death and initiating the wanderer into the perilous poison path, confusing or leading him/her through his kingdom in the sitra ahra.

Caution: Contains some venific herbs. Only for advanced practitioners.

Edition specifics: The first eight 100 ml jars were numbered and accompanied by a peacock eye-feather as well as a hand-stained emerald green flyer. Further jars come without extras and are not numbered.