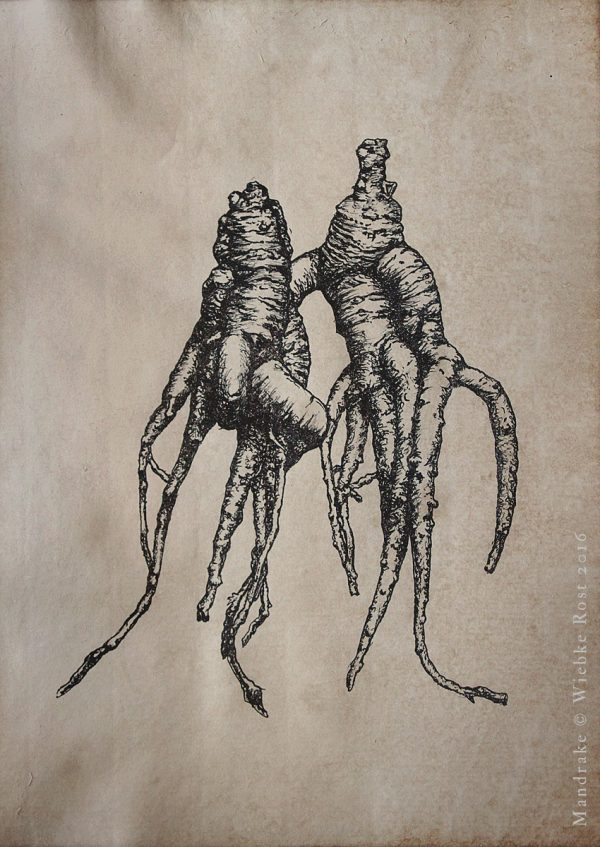 Included in this offer were two living mandrake (Mandragora officinarum) plants, together with an original ink drawing depicting the roots. The new owner received the exact plant and artwork shown on the photo.

About the plant: The mandrake is also called “white mandrake” or “male mandrake”. It is not as frost tolerant as the autumn mandrake (Mandragora autumnalis). The plant is sold, when it goes dormant. During this period it does not carry leaves. Once it arrives, it should be taken out of its container at once and planted it into a suitable pot. The mandrake develops a long tap root. The best planting vessels are elongate, such as the ones used for roses. Some people also grow their mandrake in tubes. Once planted, make sure to give it a suitable place in half shade. Water moderately during the season, where the root is dormant. Water more, when it starts sprouting fresh leaves. Note: Mandrake does not like to be moved or turned. If the light conditions change it will shed leaves and has to invest additional energy into producing new leaves. Flowering may be impaired. It is hence recommended to not move the plant. Alternatively one can mark the North on the planting pot. If one is forced to move it, e.g. when taking it indoors over winter, the mark helps to keep the plant in the same direction.

Artwork details: The root is drawn with India ink on ripped paper, which has been stained with coffee, wormwood and mandrake tincture. Attention is paid to the peculiar shape and features of the root. The result are realistic portraits, which are not only unique pieces of fine art but also give the owner a reference, when the roots are planted back into soil.