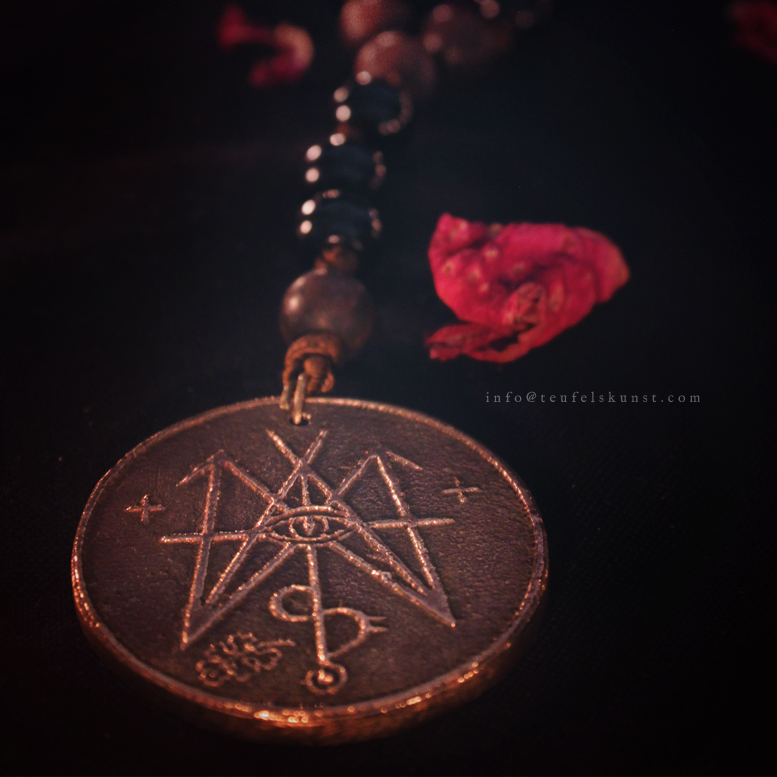 Blessed under the cold November black moon, these hand-made rosaries by Soth Arts are a special offer to followers of Teufelskunst. They consist of 58 black and 8 ebony wooden beads and carry one bronze amulet cast by blacksmith T. Puputti. Please note, each amulet may have small variations as they are all manufactured by hands (see impressions of the casting process).

The crossroad seal on the amulet is the official Teufelskunst emblem. It is also called “Sigillum Major” or “greater seed sowing seal”, as it is both rooted in the work with plants as well as the rituals performed at different crossroads. A closer look reveals the horned cross or witches’ stang and a non-human eye at its center, underlining the magician’s connection to the wild and untamed world. The rosary and amulet should thus be worn hidden from the mundane eyes of man. It may as such be employed as an empowering tool for the witch as well as a protecting amulet against the “evil eye” and the manipulative efforts of other people. It can also be utilized when ritually working with the spirits and guardians of plants and trees.

The rosaries’ inherent numerology reveals the numbers 8, 55, 58 and 66. The following are evocative aspects connected to these numbers, which through prayer and ritual can be linked with the rosaries (gematrical associations taken from Sepher Sephiroth):

8
The entrance, threshold
number of the sephirah Hod and the qlipha Samael

66
The Mystic number of the Qliphoth and of the Great work
The Lord thy God (is a consuming Fire) [Deut. iv. 24]
6 + 6 = 12
12 = number of the Zodiac and their respective qliphotic adversaries

Within a religious context the rosarium = “crown of roses” or “garland of roses” is the name of a prayer used in the Catholic church and also applies to the string of prayer beads used for counting the component prayers. A similar purpose is found with the so-called witches’ ladder, which consists of threads, hair or feathers tied by a peculiar number of knots into which are whispered spells.

The Teufelskunst rosaries are supplied as a lasting magical talisman to those, who feel a deeper connection with the work presented here. An empowering herbal blend to be used as incense or for infusing an ablution bath is included with each order.