The poisonous plant genus Aconitum consists of at least a hundred different species and has an array of legends and folklore attributed to it.

Sometimes called ‘Queen of Poisons’ or ‘Plant Arsenic’, similar to how arsenic is considered a ‘King of Poisons’.

A distinction sometimes found concerns the names Monkshood and Wolfsbane. Some argue the original Wolfsbane is the white or yellow-flowered species Aconitum lycoctonum whereas the blue flowering Monkshood, Aconitum napellus is probably the better known of the two species and it is frequently found in medieval monastery gardens. The two species contain different poisons, which are however similar in effect.

The Greek word akónitos is composed of ak = pointed and kônos = cone, an akon being a dart or javelin, perhaps a reference to the use as an arrow poison. Theophrastus suggests the name derived from the town of Aconæ (today assumed to be near Karadeniz Ereğli in Turkey). It may also have been named after Mount Akonitos in Pontus (Asia Minor), where the plant is said to have grown from the spittle of Cerberus, the three-headed watchdog of Hades, when the folkhero Heracles drew up the beast from his infernal abode. Homer (800 bc) gives the first account of this myth in the Illiad. Eight centuries later Ovid embellishes the story in Metamorphoses VII where he describes the plant’s origin and tells of Scythian sorceress Medea who attempted to poison Theseus with aconite. Aconite features also in Metamorphoses VI; Athena sprinkles Arachne with aconite upon which she is transformed into a spider (VI, 129ff.). Ovid also writes aconite was called ‘flintwort’ or ‘stoneherb’ by farmers of the region, because the plant grew on barren rocks. Pliny the Elder also assumes the name aconite was derived from aeonæ = rocks, on which the plant was found to grow. Besides, Cerberus is first mentioned by Hesiod (800-700bc), who describes the dog as fifty-headed and being the offspring of Typhon, the largest and most deadly of all creatures and Father of all Monsters, and the she-viper Echidna, Mother of all Monsters. Hence in Greec mythology Aconite is of monstrous origin.

Aconite is also called hecateis after the goddess Hecate, to whom it is sacred. Hecate, goddess of witchcraft, is associated with shape-shifting, e.g. when called upon as Lycania. In connection with witchcraft aconite is also thought to have been used by Thessalonian witches in flying ointments and by medieval witches, who mixed the seeds into hallucinogenic ointments. Amongst Germanic tribes it is reported to have been used by the Berserkers when they transformed into ‘werewolves’. Aconite is said to cause a sensation on the skin of wearing a fur-coat or feathers and may induce  hallucinations of transformating into different kinds of animals. Indo-European culture holds the name Luppewurz (old German luppi = deathly juice/poison/spell). Similar also Latin lupus = wolf. The Greek byname lycoctonum means wolf-killer, referring to its use in poisoned wolf baits, hence also the English name Wolfsbane.

Pliny the Elder also refers to the herb as ‘plant arsenic‘, and dedicates chapter 2 of his Natural History to the “most prompt of all poisons”, which he claims was also an antidote to scorpion poison. In the same context he mentions the White Hellebore (Veratrum album) as an antagonist of aconite. He goes on to describe the use of aconite and hellebore as pardalianches = pard-strangle.

Being one of the most poisonous herbs native you Europe aconite has also a long history in poison murder. Pliny mentions Calpurnius Bestia, who killed his wifes in sleep by touching their genitalia with his finger, which were smeared with aconite root extracts. According to Pliny aconite was thus also called thelyphonon = female-bane or ‘woman killer’. Aconite brought in contact with the mucuouse menbranes of female genitalia would cause instant death! He assumes yet another name, scorpio, was based on the curved shape of the root resembling a scorpion’s tail.

In Germanic folklore aconite was sacred to Thor, the god of thunderstorms and lightning, as the name Thor’s Hat indicates. In German the plant is commonly called Eisenhut and Sturmhut = helmet, as well as Mönchshut = monk’s hood. Less known German names are Venuskutschen or Venuswagen = venus wagon; quite a contrast, suggesting female and aphrodisiac attributes! however, the names are often simply based on various interpretations of the shape of the flowers. More related to the plant’s poisonous effects are the German names Würgling, indicating death through asphyxiation, and Ziegentod, referring to deaths of goats that accidentally ate of the plant.

Aconite has long been used as an arrow poison in hunting and war. Arrow heads were dressed with aconite as well as the shafts, so that an enemy who drew an arrow from the body of a wounded comrade would be poisoned too. In India aconite was mixed with other poisons and applied to arrowheads, so that the targets would rave mad and poison more people by biting them. Aconite’s use as an early biological war weapon extends also to poisoning the enemy’s water and food resources, e.g. the Romans used it as such. Roman Emperor Claudius died of Aconite poisoning in year 54.

In India aconite is sacred to Shiva, the God of All Poisons. According to legend the essence of all poisons spread from the whirling motion of the Ur-ocean or ocean of milk (samudramathana) when it produced the holy cow. The gods were frightened and ran to Kailash, where Shiva sat meditating, and asked him for help. Shiva took the poison in his hand and drank it. His wife Parvati feared for her husband and choked his throat so that the poison eventually would get stuck and upon which his throat turned blue. Because of this Shiva is also called Nilakantha = blue throat. Through his deed Shiva saved all beings from becoming poisoned. Only a tiny bit of the poison had dripped from his hand which until today flows in the veins of the blue aconite and other poisonous plants. Another version of the story tells of Shiva having turned blue from consuming all the poisons in the world. In his likeness Aghoris consume poisonous Shiva-associated plants (e.g. Aconitum ferox, Cannabis indica, Datura metel, Papaver somniferum) and other poisons (cobra venom, quicksilver, arsenic) in order to experience the divine consciousness of Shiva. Advanced practitioners consume a smoking blend of Cannabis indica and Aconitum ferox (called vatsanabha or bish) root. The Saradatilaka Tantra describes Shiva in His Nilakantha aspect: “He shines like a myriad of rising suns, he wears a shining crescent moon in his long entangled hair. His four arms are adorned with snakes. He has five heads, each with three eyes, he wears a tiger skin and is armed with a trishula.”

Aconite appears in Christian iconography as a symbol of death and it is the symbol for toxicity in European nature. It was a classic in Christian medieval monastery gardens and there exists a fictional account of its use by Christian monks in Gustav Meyrink’s novel, The Cardinal Napellus. The story is about a brotherhood named the ‘Blue Brothers’, who believed that Cardinal Napellus, the founder of their order, had transformed into the very first Aconite plant and all further aconite plants havd derived from him. Aconitum napellus is featured on the order’s coat of arms and the monastery garden is a huge aconite field, planted by neophytes after admission into the order. In the story these neophytes sprinkle the plants with the blood that flows from their scourging wounds. “The symbolism of this ritual of blood baptism lies within the planting of the human soul inside the Garden of Eden and fertilizing the plant’s growth with the blood of men’s desires.” The members of the order are described to be using the plant for inducing hallucinations or gaining higher consciousness: “When the flowers vanished, we would collect the poisonous seeds, which resemble small human hearts and according to the secret doctrine of the order depict the seed of faith, of which is written that it lends the power to shift mountains, and they would eat from it. Like the dreadful poison changes the heart and brings men to the liminal point between death and life, so the essence of faith was meant to transform our blood – to become a miraculous force within the hours of gnawing death torment and ecstasy.” (Meyrink 1984). 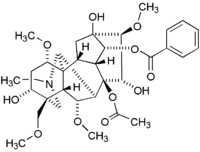 Poisoning: Aconite poisoning is said to cause a feeling of wearing a fur or a feather coat. Smelling on the flowers is irritating to the nasal mucosa, causing them to swell up. The herb in full flower is reported to emit fumes that cause temporary loss of sight. If ingested aconite produces an acrid bitter taste. It is poisonous to goats and swine, but is said to have stimulating effects on horses. Because it makes a horse fiery horse traders would feed their horses aconite prior to offering them for sale.

Touching the leaves or root have been reported to cause symptoms of poisoning. Aconite brought in contact with an open wound on the finger is reported to have caused pain in the whole arm and may effect the entire cardiovascular and respiratory system.

Acute aconitine poisoning causes a tickling and burning sensation followed by paralisation of the tongue and mouth and disabled speach. It may also cause a hallucination of ants crawling all over the fingers, hands and feet, followed by uncontrolled spasms and paralysation of the face muscles and a cold feeling, as if ice water would run through the veins, since aconitin stimulates the body’s low temperature receptors. These symptoms are followed by a decrease of all receptive functions, paralysation of arms and legs, dyspnoe, seeing green, vertigo, ear whistling, trigeminus distress, nausea, vomiting, diarrhea and incontinence. Increasing dyspnoe and cardial dysfunctions may ultimately result in death through heart failure and or respiratory failure. Depending on the dose death may set in as fast as within an hour. Aconite does not effect the cerebral functions. The patient may fall into a coma only during the very last stage or remains clear of consciousness until the last second, as in strychnine poisoning.

Treatment is mainly supportive. All patients require close monitoring of blood pressure and cardiac rhythm. The stomach is emptied by tube or a non-depressant emetic. Gastrointestinal decontamination with activated charcoal must happen within 1 hour after ingestion. The major physiological antidote is atropine, which is used to treat the bradycardia. Other drugs used for ventricular arrhythmia include lidocaine, amiodarone, bretylium, flecainide, procainamide and mexiletine. Cardiopulmonary bypass is indicated if the symptoms are refractory to treatment with these drugs. Successful use of charcoal hemoperfusion has been claimed in patients with severe aconite poisoning.

Historical antidotes are atropine and digitalis or strophanthin, injected subcutaneously in maximal dose. Alcohol, strychnine, and warmth have also been employed in the past, but are of course overcome today.

Toxic Dose: 0,2 g cause symptoms of poisoning, 2 mg are said to be lethal. The dried herb is tenable for one year. One report cites skin-contact with the leaves picked with barren hands caused tickling, numbness and effects on the circulatory system. Indian Aghoris smoke the herb in tantric rituals. There are no reports about dose.

All parts of the plant are poisonous. The highest concentration of poison is in the root and seeds.

According to Christian Rätsch the nectar of the flowers may produce a psychoactive honey.