In my part of the world the past new moon occured close to the midnight hour and when the moon was just entering into the sign of Scorpio. In addition friends and followers in Eastern Asia and most of North America could simultaneously witness a beautiful partial solar eclipse. An astrologically and magically interesting time, some would already hold their Samhain celebrations on this night, closing another circle, saying farewell to the old and inaugurating a new year. It is the beginning of a liminal time, when the veil between the world of the living and the other side thinnens. It is believed the souls of the deceased – both beloved or malign, familiar or nameless – come to visit and contact the living, in dream or even physically. Temperatures are dropping, you see your breath in the cold air. The trees are yet aflame in autumn colors but will soon turn barren. Winter is just around the corner.

I felt it sooner this year than usual, perhaps owed to the early arrival of summer, autumn and winter are coming earlier as well. And it feels like its going to be a cold one. I experienced some dark days and nights, where I turned inside and contemplated, what has been done and what can and will be done. I got inspired and wrote these lines:

I feel the change of season
this autumn fire
the nights getting longer
the impending darkness
this cold breath down my neck.

But I am aflame and
burning with passsion
to a degree that it
almost consumes me.

Memories and dreams
the future and the past
they are merging
in a round-dance of autumn leaves
in the yellow light of street lamps
or in the dim grayness of
one drizzly September day.

I am day dreaming
and the world around me becomes
like the surface of a pond
into which I dip my finger
and suddenly the whole picture
starts to ripple and disperse
and the voices of people talking to me are muted
and I hear something else.

The veil is thinning.

I am dreaming of reconciliation.

I hear from a lot of people this year has been their worst by far. Some say they felt a strong negative Saturn influence in their life. Things being stolen or lost, relationships breaking apart, unexpected changes for the worse and in some instances also suicide attempts. There was a lot happening around me and for all I know there is little in life to rely on. Believes and faith, relationships and worldly values are questioned and challenged. And the idea that from loss and pain still something good or even better arises, may infact not always hold true. Yet the quality of conversations improves, deepens. Superficialties don’t suffice any longer. And I still feel lucky. I do have my self, my work, and spirits and friends to turn to. Even if they may be struggeling themsselves; as long as there is a shared will to continue and work towards better times – not sit and wait – there is reason for hope.

What really helps me during times, when there is apparently nothing positive at all, is the feedback I receive from you, my customers and followers. It does indeed mean a great deal to me. It is one reason why I’m doing what I’m doing and why I continue this project. Feedback such as this:

Having received one of your plant sigil card sets, I wanted to thank you for your work and express my gratitude in having received one. It is a beautifully crafted work, with an obvious spine of honesty, experience and exploration. A profound expression of the green, from the veils of the divine. – JR/O.

Thank you and all who write me messages, comment, like and fave! Thanks to over 2000 followers on facebook and 500 on tumblr, thanks to my watchers on deviantArt and elsewhere! Thanks to the loud and silent supporters and the imps and gnomes and wizzards doing ‘magic’ in the background and spreading the word! You know who you are.

And though it is true that this is often a lonely path we do take inspiration from another, consciously or unconsciously. I like to think that the same spirits contact us individually and sometimes they whisper the same and other times different things into our ears. Tuesday I thought about harvesting Belladonna under the waning moon. But the night was cold and rainy and there was no sharp shining crescent sickle to be seen that would have called for harvest. Thursday I read of Harold Roth‘s plan to harvest Belladonna under the new moon. I first thought no, lets leave them for another month or wait for next year’s Walpurgis. But then I gave it a second thought, went outside short before midnight and the conditions were just right.

The midnight hour was the hour of Venus and the dark moon had just entered Scorpio. A fitting constellation for working with the poisonous (scorpio) green (venus), and the darker aspects of the goddess (black moon), of whom the Belladonna is evocative. The Deadly Nightshade also has connections to the Germanic myths of the Wild Hunt, especially the Valkyries, daughters of heaven and earth (Wotan and Erda), who accompany the souls of the warriors that died in battle, to their final destination in Valhalla, which is reflected in the German name “Walkerbeere”. The Wild Hunt is said to begin with Samhain and culminates during the Winter Solstice and following nights. My first abstract vision of the plant’s essence shows her infront of a dark stormy sky with flashes of lightning and blood is raining from black clouds.

I took two roots, grown in pots, and both about 3 years old. The plants have flowered ready and the lasts berries are also ripe. In fact the stems are already slowly dying back and new green sprouts come from the root base. So it was indeed good timing. Especially since the following nights were even colder and the green parts don’t survive freezing. It makes sense that the time around Samhain is traditionally the time for the last harvest, which is then put up in the home for drying.

I also encountered a surprise when digging up the second plant as it had grown a long tap-root. It wouldn’t take an end and I actually could not unearth it wholly. I had to dig much deeper to get to the end of the part still stuck in the ground and it turned out that entire thing was indeed over 40 cm long!

I removed the soil manually, then cleaned them in rainwater and put them on the harvest altar, together with previously harvested roots. I lit beeswax candles and offered libation. I noticed a spicy smell and, though I used gloves, felt actually a bit benumbed from the fumes. I learned that the alkaloids concentrate in the root during autumn and winter. It may well be possible these two roots have a higher potency. They are now drying slowly and I plan to later make fetishes with them that tie together visullay the mentioned astrological and magical aspects. Below are a few pictures to show you their raw beauty:

In September I had already gathered leaves and sprigs, which I put between newspaper pages for drying. What do you read in there? It’s been a Belladonna year for sure! 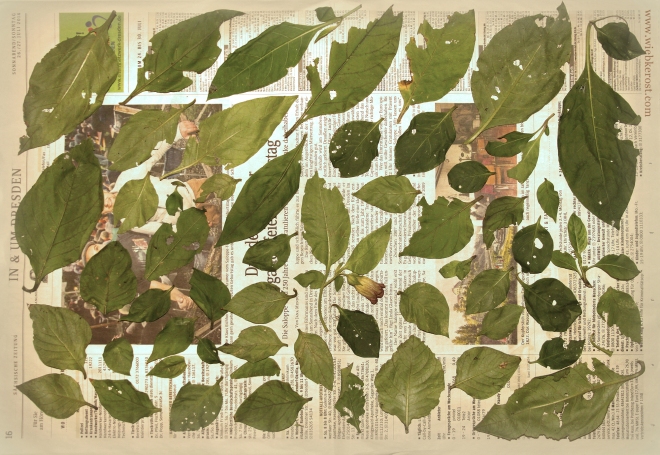 Yet there are plenty of other herbs (and for that matter also seeds!) and so I find myself again running around the house and garden, collecting, sorting and processing all sorts of green harvest. It will still be a giant task to take photos of everything and make it available for ordering. I am also working on a larger herbal commissions, which includes labeling and filling custom bottles for a client.

At least I am ready now with rearranging our front garden (more about this later) and next is the raised bed. So lots to do this week until the official Samhain date. And I still have a very special interview in the making, as well as news concerning my contributions to the third Pillars Periodical Journal! But all in good time. 🙂

So long, after so much deadly nightshade here is now another plant, which embodies the month of October: the Chinese Aconite (Aconitum carmichaelii), or Herbst-Eisenhut, as it is called in German, is the last of the aconites to flower and brightens up the October month with its lush blue-violett inflorescences. It’s poisonous as hell too and another name for aconite was in fact Scorpio. The aconite, as the ‘king of poisons’ is in different ways to be seen as a counterpart to the belladonna or ‘queen of poisons’, who’s atropine is the physiological antidote in aconite poisoning. Now I certainly wouldn’t recommend doing the test. However I do like to grow them besides each other, for higher inspiration and guidance. In fact, I do have quite a few aconite and belladonna seedlings to plant out yet… Yep, lots do! 🙂

Summer is coming to an end and yet I did not even share half of the photos I’ve taken during the past three months. So I sat down with a glass of red wine and made this summary of summer garden impressions for you. Click through the gallery to find a commentary on each motif and feel free to comment!

The poisonous plant genus Aconitum consists of at least a hundred different species and has an array of legends and folklore attributed to it.

Sometimes called ‘Queen of Poisons’ or ‘Plant Arsenic’, similar to how arsenic is considered a ‘King of Poisons’.

A distinction sometimes found concerns the names Monkshood and Wolfsbane. Some argue the original Wolfsbane is the white or yellow-flowered species Aconitum lycoctonum whereas the blue flowering Monkshood, Aconitum napellus is probably the better known of the two species and it is frequently found in medieval monastery gardens. The two species contain different poisons, which are however similar in effect.

The Greek word akónitos is composed of ak = pointed and kônos = cone, an akon being a dart or javelin, perhaps a reference to the use as an arrow poison. Theophrastus suggests the name derived from the town of Aconæ (today assumed to be near Karadeniz Ereğli in Turkey). It may also have been named after Mount Akonitos in Pontus (Asia Minor), where the plant is said to have grown from the spittle of Cerberus, the three-headed watchdog of Hades, when the folkhero Heracles drew up the beast from his infernal abode. Homer (800 bc) gives the first account of this myth in the Illiad. Eight centuries later Ovid embellishes the story in Metamorphoses VII END_OF_DOCUMENT_TOKEN_TO_BE_REPLACED

Finally I could find fitting glass vessels for the remaining Aconite roots! These are tubes with a flat base and a natural cork stopper for sealing. They are 16 cm in height and perfect for herbal fetishes. A seal hand-inked on a cleansed piece of laid paper and info about the Aconite herb is included with each root fetish. – SOLD