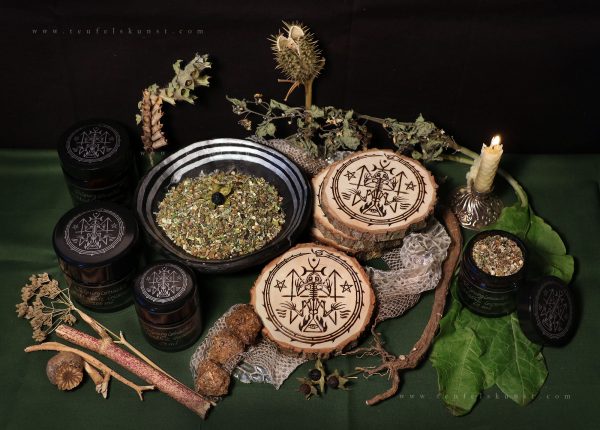 This incense blend is inspired by the “Walpurgisnacht”, the myth-enshrouded night preceding May Day. In legend and folklore the night has become associated with the witches sabbath and the ride to the sabbath mountain, which was popularized in Goethe’s “Faust”. It coincides with pagan Beltane celebrations and marks one of the major feast days (together with the solstices, the equinoxes as well as Imbolc and Samhain). In Satanism it is even considered the most important feast day by some and associated with the “Western throne” or “tower”. Notably, the point in time may have been of significance already in prehistoric times, as the sun’s position on the 1st of May is marked in megalithic circles.

The name Walpurgisnacht stems from the Christian saint Walpurga (or Walburga), who was revered for battling diseases and witchcraft. Walpurga was born into a wealthy family in England, Devonshire in 710 AD and studied medicine. She became a Christian missionary and later a Benedictine abbess in Germany, succeeding her brother Willibald, who founded a double monastery in Heidenheim. She became thus one of the most influential females at the time, who was attributed with working wonders and the ability to gather followers and convert them to the Christian faith. She is said to have perished in 777 (more likely though in 779 or 780). At Eichstätt, her bones are kept in a rocky niche, which began to exude a miraculous oil, soon attributed with healing powers.

On Walpurga’s first journey to the European mainland, the ship came into distress at sea. According to legend, Walpurga spent the entire time praying on deck until the ship arrived save in Antwerpen. She is hence considered a patron of sailors and a protector against storms. In another legend she saved a child from starvation with only three ears of wheat. She is hence portrayed with three ears of wheat and developed into a protector of farmers. This attribution may have linked her with an older Pagan concept of the Grain Mother and farmers would fashion her replica in corn dolls. She is also depicted holding a jug and a book. Due to her medical background she is also sometimes portrayed with bandages.

Walpurga was canonized and her relics were moved to Eichstätt on 1 May in the year 870. The event was associated with “miraculous cures“. The conversion of former May Day celebrations and merging it with the Christian saint’s day occurred later, and as such was adopted by other countries. The German name Walpurgisnacht occurs in written form for the first time in the 17th century.

From the 17th century onward, legends circulated about sorcerer gatherings and witches meeting on the Brocken in the Hartz Mountains during this night, which was then also referred to as “Hexennacht“. With the spreading and exaggeration of such legends increased also the angst and need in the populace for protection from the same – a condition the Christian church made use of to affirm its power over the people and by exorcising authority, when its influence was weakened by scientific progress and enlightenment.

Bonfires were and continue to be lit on Walpurgis Eve to avert witches and drive out evil spirits. But likewise satanists and practitioners of dark mystery traditions utilize the special energies on this night to celebrate their own (dark) gods in individual ways, solitary, in groups or in the company of familiar spirits. The ride to the sabbath mountain through astral travel to gather with other witches, are but one variant.

This incense blend shall hence serve as an empowering tool and door opener in your own Walpurgisnacht rituals. It contains among others the grand of witch herbs, many of which are also ingredients of flying ointments. The herbs are ritually harvested from my own garden and surroundings. In addition the blend contains precious propolis – the resinous “glue” that bees produce to protect their hive, as well as mugwort and an especially aromatic wormwood that a powerful ally in the craft granted me from his own garden.

The incense blend hence smells spicy and sweet but also herbaceous with bitter undertones. Heating or burning this blend, may trigger wicked and intense visions. Use this blend where- and whenever you aim to establish and direct powerful oneiric currents and to open, enter and commune with the shades in the astral realms beyond. It may also aid in dark love spells, e.g. for enticing, turning and binding a person.

In my personal ritual work, I have come to associate this night in particular with the ophidian and batrachian animae and spirits connected to these currents both in form and essence. This is reflected in the sabbathic seal I designed for this occasion, and which adorns the incense jars. A limited edition of six talismanic “Sabbath Seal” discs, pyrographed in willow wood, can be ordered along with the incense. Or purchase the disc separately.

The blend is not tied or limited to the actual “Walpurgisnacht”, but can be used during any time of the year. The amount however is limited and available only once a year.

Tip: Place the incense on a heater for optimal results. The blend may also be heated and added to oils or wax for ritual candles. Use gloves when handling.

Warning: Contains venific herbs. Use gloves when handling. Do not inhale when burning! If used indoors, make sure the room is well ventilated. Not for beginners.