This is the third in a series of ritual incense blends designed for working with the qliphoth (or kliffot). It is dedicated to Adramelech, the ruler of the eighth qlipha on the tree of death. The corresponding qlipha is named Samael, Hebrew סמאל, meaning “poison of god”. The qlipha and its ruler are associated with Sha’arei Maveth (or Shaarimoth), the “gates of death”, one of seven infernal habitations. 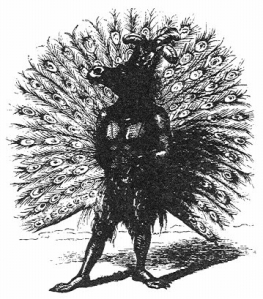 Adramelech is described as a “powerful king”. He is one of the eleven heads that govern the qliphotic pantheon. Similar to other demonized deities, Adramelech was once worshiped as a sun god. His worship later merged with that of Moloch.

In Collin de Plancy’s Dictionnaire Infernal, Adramelech is depicted as a mule with peacock feathers, evoking associations with Melek Taus, the “peacock angel” of Yazidi religion. Melek Taus is worshiped for his independence, since he refused to bow to Adam, the first created human. The story resembles that of Shaitan in the Quran. In Islam this refusal to bow to god’s creation is interpreted as a display of sinful pride. Melek Taus however, reasoned that he was made of god’s own light and could not bow to Adam, who was made of dust. Therefore god rewarded Melek Taus and made him his deputy on earth and leader of the other angels. The peacock’s appearance is sublime and likewise Melek Taus proved knowledge of the sublime in his choice. Besides this the Yazidis view the peacock as a symbol of immortality.

Samael also appears as an independent figure: for once he is described as an accuser, seducer and destroyer and a “chief of evil”. At the same time he occurs as an arch-angel, residing in the seventh heaven, as the chief angel of the fifth heaven and features as the “angel of death” in Jewish lore. In the old testament he appears as the serpent in the garden of Eden, and as a demonic entity and spouse of Lilith.

As the serpent in the garden, Samael seduces Eve to eat of the fruit from the tree of knowledge of good and evil. Similar to Prometheus, who steals the fire from the heavens and, against the will of Zeus, brings it to mankind, Samael delivers the gift of gnosis to the first humans, even though god had forbidden them to partake of it. Henceforth they are expelled from the garden, and the serpent along with them. Samael becomes the consort of Lilith and they breed demonic children.

Eve, impregnated with the seed of the serpent, begets Cain, the son of Samael. Cain slays Abel, and is exiled to wander the land of Nod. But he is protected by a mark, which his father Samael placed on him. This mark is a warning that, whoever attempts to harm Cain, will be punished sevenfold.

The above aspects are of relevance, since the different manifestations of Samael here sort of merge with the qliphotic king Adramelech. All aspects surrounding the qlipha in question are taken into account, before advancing and concentrating the essential links within a single incense blend.

Now let us look at the planetary influence: Adramelech’s qlipha is placed under the influence of Mercury. The corresponding element by the same name is a white-silvery metal, liquid at room temperature and poisonous. Early uses of mercury include the making of divinatory mirror bowls, which were found in elite Mayan tombs. Today it is employed in liquid mirror telescopes. Mercury is also called quicksilver. In alchemy it represents the “spirit” and is attributed with various transcendental properties, due to its volatile nature.

The god Mercury (Greek Hermes), is the messenger travelling between the realm of the gods and the world of humans. In his underworld manifestation, Hermes chthonios, he acts as a psycho-pomp, guiding the souls of the dead through the netherworld.

Of interest in connection with Adramelech and his qlipha are transcendental, transforming and empowering properties that reach beyond the realm of the living and this world. What lies beyond the reflective mirror’s surface? Which herbs help with clear sight and telling the lie from the truth? Which herbs aid in seductions and can confuse or blind an opponent? Which plants and resins assist in opening the “gates of death” and contacting and mobilizing the souls of the deceased? The incense for the work with this qlipha and its ruler is hence complex in nature. The sublime king Adramelech becomes a dark soul-guide, residing beyond the gates of death and initiating the wanderer into the perilous poison path, confusing or leading him/her through his kingdom in the sitra ahra. 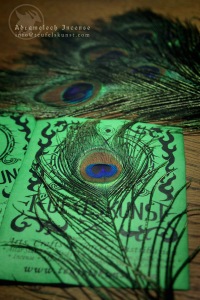 Details: The first eight 100 ml jars are numbered and accompanied by a peacock eye-feather as well as one hand-stained, emerald green Teufelskunst flyer. The remaining incense comes without extras and is not numbered.

A commission I have been working on for a few weeks and which happened to be completed on the seventh of this month, was the creation of an incense blend for Qayin and his twin-sister/bride Qalmana. The ingredients for these blends are mainly inspired from the workings outlined in Liber Falxifer I and II.

Both blends were completed at the stroke of midnight from August 6 to August 7. At this time Venus was retrograde and at the edge of “plunging” into the underworld. Dark astrology says, “Particularly matters connected with ‘poison’ are accentuated badly”.

I took inspiration from this dark venus aspect and enhanced my Qayin blend with some venific herbs, such as aconite, henbane and mandrake root, which are added in moderate amounts. These address the poisoner aspect and at the same time all have links to necromancy and the underworld. Further ingredients, that count among the more traditional are myrrh, patchouli, blackthorn, sandalwood, wormwood and yew. Cloves are added for fragrance as well as palo santo wood. Tobacco, long pepper and red chili pepper spice up and enhance the blend’s effectiveness. Some rare additions are ebony dust and ironwood shavings, the latter which have been granted to me by a long-time customer. Beside myrrh resin I added also black copal (one of my all time favorites) and opoponax as well as asafoetida. These all possess to links to the dead and necromancy as well as underline the darker aspects of the Qayin. Red carnation flower petals, black and yellow mustard seeds and some more ingredients refine this incense blend, which is suited for special occasions and feast days but also as part of regular offerings.

Scent: earthy, spicy, hot, but at the same time fresh, resembling the smell of a cold grave or crypt, dominant notes of clove, cypress and opoponax

The incense blend for Qalmana in turn, has an overall flowery sweet scent and emphasizes benific aspects of Venus, such as beauty, lovingness and splendor but at the same time also has protective qualities. It contains among others flowers of apple, cherry, elder, lilac and rose. Precious benzoe siam resin, labdanum, vanilla bean etc. combined with spicy ingredients such as coriander and clove yield an exceptional, sweet, floral mystical fragrance. Besides these the blend contains also rosewood as well as whitethorn. The latter is added also to underline the twin/dual aspect of Qalmana towards her spouse, whose incense blend contains blackthorn. A small amount of blue Papaver somniferum seeds reveres the queen of magical plants and adds a dark touch.

Characteristic for both incense blends are woods and resins, as well as fruits, leafs and flowers from thorny trees, such as myrrh, rose, whitethorn and blackthorn respectively, in harmony with the esoteric doctrine pertaining to the path of thorns, upon which Qayin and Qalmana guide their disciples. Protective and baneful, benific and venific elements balance out each other. The blends come along strong and may be mixed in equal amounts with myrrh and frankincense or copal.

Both blends happened to amount to 182 ml each. I am currently not able to sell them on a larger scale. But I consider offering simplified versions better suited for daily usage soon.

On the side, I do not know of any other book dealing as exhaustively with the female counterpart of Qayin as LF II. And it is with some excitement that I see Ixaxaar announce a 3rd and even 4th volume in the series. Looking beyond the controversy surrounding these books they still remain as works of love and devotion to the spirits. They also continue delivering interesting details and pieces in the puzzle to those, who continue searching…