For the coming 7 days the Teufelskunst Instagram and Facebook page will be filled with works by the talented Emery Kereru from New Zealand.

Emery is the first artist to hijack Teufelskunst. Read on why…

“Emry Kamahi Tahatai Kereru is a lifelong devotee of the black art from the Mot Valley, New Zealand. His works serve as record of a soul’s descent into perdition, through the arts bequeathed by fallen angels. He favours steel-point illustration as a medium, for its precision and control. Through symbolism he hopes to grasp the language of the divine and the mysteries of the Great Work. By realistic as possible illustrations of baneful witching herbs he has tried to capture the natural forms that carry a trace of their inmost essence. Faith is the basis of all he does, and he strives for as great a distance as possible from ego driven occultism and the empty regurgitation of familiar images and forms, disconnected from rooted contextual meaning. These works are true reflections of a lived experience beyond expression.”

Asked for his signature, Emry sent me this magic quare:

@e.m.s.a.r.t.s would you be willing to explain to my followers, how you went about constructing it?

E: “The magic square came to me during a period of intense prayer bathing in the river and fasting. It cyphers and rectifies my own name + arts mission into a Latin verse based on Revelation 21:8. EX MORTEM SECUNDUM ASCENSURA REVELATIO TEMPLUM SATHANAE, in seven descending columns, across the bottom line it reads simply A + O, which represents Spirit as the beginning and end of all, and the goal of the Great Work. The raising of the Temple, in a metaphoric sense, by the Sons of Fire, in 49 letters is 7×7, the Lord’s Prayer recited sevenfold and also 4 + 9 = 13, the bloodline of Lucifer. The weeds of the field are pulled up and burned in the fire, second death, which is perdition of the soul upon the descent of seven steps, to dedicate oneself to the spiritual work through the Devil’s pact.

The signification is that works are undertaken as an exercise of devotion and self rectification with approval of spirit.

So these works shown here are actually drawn on the blank pages from the beginning and end of bibles stolen from Christians. At the time I was hitchhiking to town once every week or two and living on about $20 a week mostly eating potatoes or weeds foraged off the land.

So I would hitch a ride to town, steal a Bible, buy a bottle of wine and a packet of lambs hearts and a few other small items. The rest of the books was used as firelighters for ritual fires of Cypress, Laurel even Yew or other specific woods.

The pages marked with the witching herbs are wordless, before Genesis and after Revelation. The rest is torn up and burned in the fire. The series is entirely symbolic and every work is prayed over with offerings to the plant spirits. Each took about three full days outside.”

The next image shows an impression from an exhibition of Emrys botanical drawings. It was this that caught my attention. I had known Emry from before, though only through e-mail contact. He was one of the first to order poison garden seeds from me. Nevermind he was in New Zealand…

Years later he sent me drawings he had done of various plants. It was just a glimpse, but it was clear, that he was serious about drawing and it looked good, meaning, professional. So I followed his steps in art and mixed media over the past 3 years. And it is with joy, that I now present to you this first small retrospective.

1 week, 9 posts. Watch out and enjoy the stories that come with each… 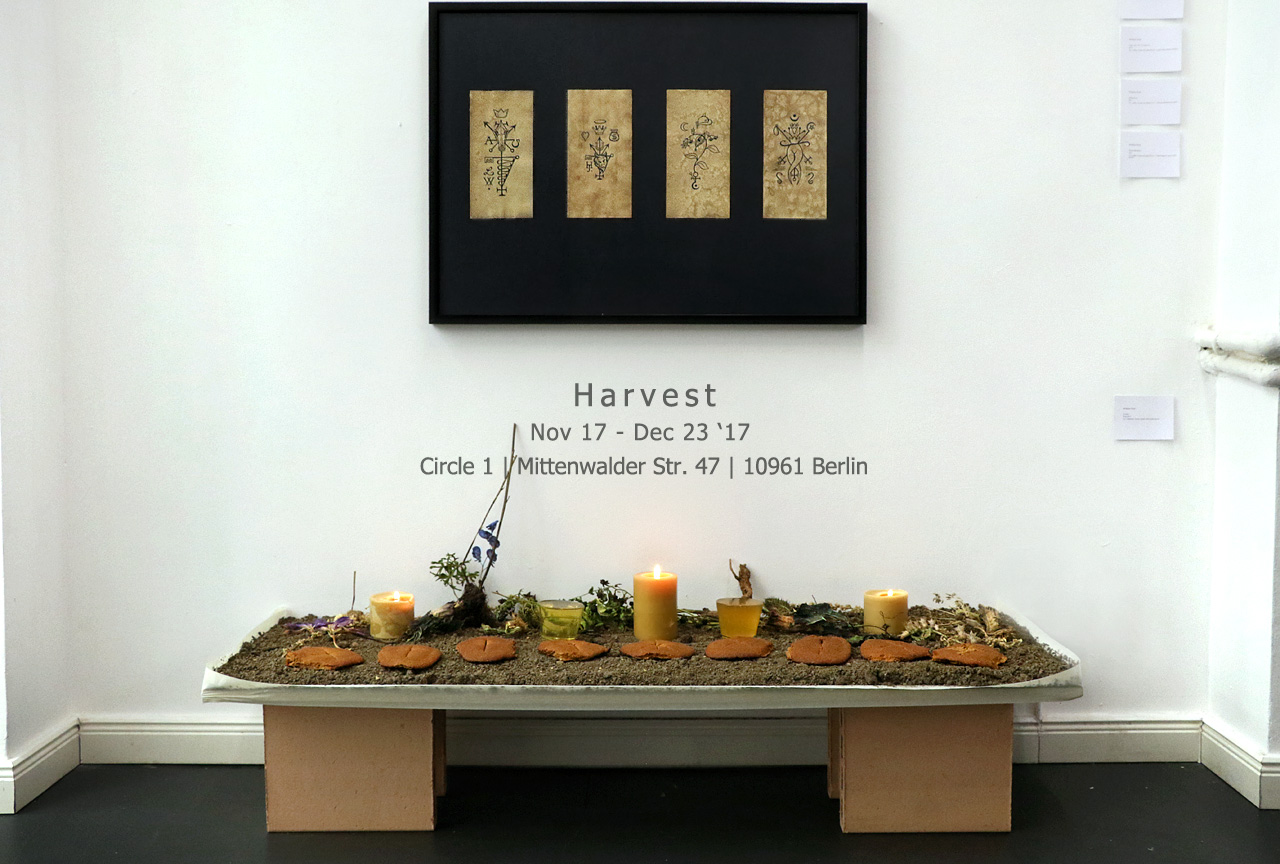 I am happy to share the news with you that I will be part of the exhibition “Bad Intentions” at Circle 1 gallery in Berlin, opening November 17. You are all invited to attend and spread the news!

This is a unique opportunity for me to bring my plant inspired art to a new audience. I will be showing ink drawings of my “Sigilla Magica” and illustrations supported, by an installation with different magical herbs from my garden and surroundings.

Important (!) Due to the exhibition preparations now going into its last and hot phase, I will not be able to process new shop orders until then. All orders placed now or later, will be shipped in the week following the 20th of November.

Below a quote from the introduction text, by curator Avi Pitchon:

“Bad Intentions” seeks to modestly contribute a tiny voice to hopefully echo into a massive abyss. The title is a reference to the good intentions of ‘artivism’, and where they lead to: the disappearance of both art and activism. The exhibition does so by staging an absurd tear between art and artist, in the hope that a gaze into the tear might enable a distinction between art and politics. The artists selected for this group exhibition are Jewish-Israeli, Palestinian-Israeli, Jewish, Palestinian and German. However, no artwork in this exhibition forms an explicit mirroring of any social or political tensions formed within the above ethnic/national triangle. The artwork does not ‘speak for itself’; it simply speaks by itself. “Bad Intentions” intentionally ignores the background and circumstance of the artist, in order to destabilise anything that is expected of such a grouping of artists, because all of those expectations are not only tired cliches, they also silence the speech of art. “Bad Intentions” is thus an invitation for the viewer to empower themselves by placing the weight and responsibility of attention on them; by not providing crutches of meaning.

This exhibition is supported by the Szloma Albam Stiftung