Teufelskunst is taking a break from September 9th until September 26th.

Mark this date: on the 27th of October Teufelskunst will participate for the 3rd time in the Samhain Celebration in Gotha. The weeks ahead are needed for preparations.

The coming weeks will be very busy and due this delivery times may be longer than usual. I may also take longer to respond to messages and emails.

I am not able to take on new commissions right now, even though they keep pouring in. When possible, I will recommend other crafters and artists.

Thanks for your patience!

Teufelskunst is moving to a new location and the web shop will be closed, starting:

Easter Sunday, 1st of April
until
Sunday, 15th of April

All items listed in the shop will be marked “out of stock” until I am able to resume business later in April. Once I am settled, I will pick up work again and continue crafting new occult art for you.

So long, Teufelskunst is wishing you a blessed Good Friday and spring time … may it finally commence!

The Blessing Seal of Spring 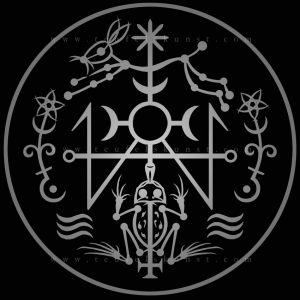 To be burnt on apple wood and consecrated with spring water

As Teufelskunst keeps growing it has long been my wish to offer my customers an easier way to order my hand-made artworks and incense blends. This wish is finally becoming reality. The new webshop is on the way!

The next weeks will hence mark a transition period, as we are working on setting everything up. On May 20th/21st, the following changes will take place:

So long, I hope to soon be able to offer you all a better service.

More updates on the event, my stall and exhibition to follow this week…

Art is uncompromising and life is full of compromises.

There have not been any updates to this blog but this ought to change.

My work with Teufelskunst continues – I have been working on commissions, preparing new items as well as updating the site and re-arranging the list of plant profiles, to which have now been added thumbnails as well as short descriptions. This should make navigation easier and also more attractive. Besides this have been added lots of new articles and the list of herbs discussed in detail is growing. Opening the round for this year are four solar herbs, namely:

Angelica – The aromatic sun and fire herb has a long tradition of usage as a medicinal “all-heal”. Originally called Kvann, it was well-known in Northern Europe, e.g. the Sami people and Vikings used it as a food source and for flavouring. Hence it is also known as “Norwegian Angelica”. After the introduction of christianity and the spreading of the black death…

Lesser Celandine – The herb’s Celtic name “Grian” means “sun”. It has also been referred to as “spring messenger”. The flowers of Lesser Celandine signal the arrival of spring and days getting longer. In German it is called “Scharbockskraut” or “Skorbutkraut” = Scurvyherb. The early leaves are rich in Vitamin C and have been taken on board by sailors…

Primrose – In Norse mythology Cowslip was sacred to the goddess Freya, the “lady”, and was also referred to as “Freya’s Key”. Within christianity the flower became dedicated to St. Peter and the Virgin Mary and was referred to as “Our Lady’s Keys” and “Keys of Heaven” or simply “Keyflower”, which all relate to the bright yellow pendant flowers…

Rue – In magic and folklore rue is believed to break hexes and protect. E.g it was part of the infamous Four Thieves Vinegar, which protected four thieves from the Black Death. It is also known as Herb-of-Grace. Ritual sowing methods demand the pronouncing of curses whilst scattering the seeds respective a young plant ought to be stolen in order to be potent in magic. In Milton’s Paradise Lost…

Rue is often used in tinctures, incense and herbal blends for cleansing. Lesser Celandine and Primrose grow in abundance in our yard. And Angelica I have lately been using in different incense blends. I finished the article about this herb late at night and the aromatic scent of Wild Angelica seeds are the last thing I remember, before sinking into a comatose sleep, which granted me a surreal dream with the Dead and the Poisoner. The dream was so strong and intense that I’m guided to use both, the root of Angelica archangelica as well as the aromatic seeds of Angelica sylvestris in dream and divinatory incense blends.

What is planned for the coming months? I have continued work on new wooden seed boxes. I have also worked on new plant sigils, which are to be revealed later this year. I have further been absorbed into researching the conceptual backgrounds and ingredients for new incense blends, which resulted in three new formulae for the Queen of the Night to be presented soon, as well as one incense blend for the Mother of Man-Dragons.

Besides these I have been commissioned for a solar/fiery incense inspired by Norse mythology. I composed two blends, focusing on fire and sun symbolism, and taking into account runic attributions for the herbal ingredients. They are called “Múspell” and “Sowilo” incense respectively. The incense blends are currently not for sale, but I can do more of them by request. The same commission also lead me to working again with the mighty yew tree, more about which I may share later.

I have also been asked about the third series of my magistelli poppets as well as the next row of sigil cards. All I can say is at this point, please be patient! Pertaining to art, the next will be a small print run of the Regina Amandrakina idol, which was published in the latest and now sold out Pillars journal. And speaking of it, Anathema publishing offered me to sell two remaining copies of the journal through my site. So I’m thinking about arranging a special offer. Again more about this later.

For now I just wish you all a blessed Beltane/Walpurgis night!


The Teufelskunst web-shop remains closed due to family duties. A rare opportunity to connect with me is therefore the upcoming Viridis Genii Symposium at viridisgenii.com where I will be a presenter and workshop host on September 25th. Dismiss