I am running low stock on most incense blends and will not be able to restock all until October. Please remember also, that I will be offline from the 1st – 15th of September! I will still handle and ship orders placed until Friday noon CET.

Completed on this new moon, 11/11 – 1,2 l of Lilith incense, blessed in a black moon triangle of manifestation underneath the talon feet of the skull-masked corpse queen. 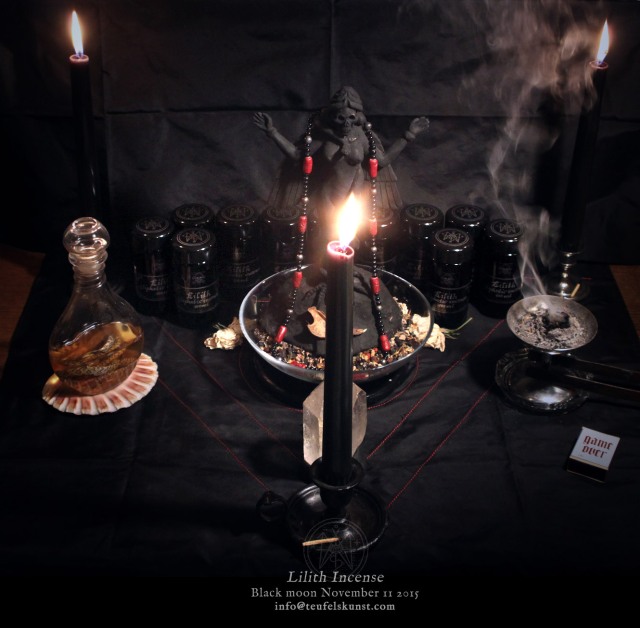 This is the second incense blend dedicated to the qliphoth. It contains flowers, herbs and resins connected to the death moon and honors Lilith as the black queen of the night side. Lilith is a demonic deity, often associated with seductions and sexual perversions. Of the seductress it is said

“Her house sinks down to Death, And her course leads to the shades. All who go to her cannot return And find again the paths of life.” (Proverbs 2:18-19)

In the qliphotic working system Lilith rules the qliphah Gamaliel, which is referred to as “the obscene ones” within the qliphotic context, even though it rather translates as the “reward of god”. Gamaliel is seen opposite the sephirah yesod on the tree of life, which is associated with the planetary influence of the moon – the unconscious in which the other spheres are present yet dormant, like a lake filled with emotions and fluctuating reflections, situated in between the higher planes and the physical plane of manifestation. Therefore Gamaliel is connected to an inversion of these lunar flows, the dark of the moon, lunar eclipses and may be envisioned as a lake filled with black water or “soul matter”.

In the darkness of a new moon strange and fantastic flowers may blossom, and in the redness of the eclipsed harvest moon the flow of life’s currents might be reverted, facilitating the occurrence of manifestations or incarnations from the other side.

Of Lilith is also said she is a mother of demons and rules over 480 legions of shadows. Among these ‘shadows’ are the souls of the children that have died as infants, in childbirth or due to abortion. In this context Lilith is envisioned as a demon who “snatches away the souls” of these children and she is portrayed with bird talons or referred to as “screech owl”. Hence protecting amulets against Lilith were hung above cradles for protecting the infant from the grip of Her talons.

Among the herbs sacred to this demonic deity are Mugwort and Wormwood (both potentially abortive). Both herbs are also often employed in astral workings, as part of incense for divination (e.g. in dream, necromancy etc.) and philters. Besides these, the blend contains flowers of Jasmine, Lilac, Lily, Lotus and Rose. Jasmine is a classic for any “lunar” blend. Sweet Lilac covers the stench of death. Lily is not only evocative in name but also perhaps the most iconic funeral flower and there’s just tons of religious lore connected to this flower. (To me the sweet morbid smell of white regal lilies is simply most evocative of Lilith.) Lotus is the flower representing female divinity and bears links to the realm of death, rebirth and resurrection. Lastly Rose, both white and red are the traditional flowers used in Her veneration, as they both represent mystery and sacredness.

And then there is willow bark, added not only because its typically associated with ‘female problems’ and facilitating the blood flow. This bark is harvested from an old hollow willow tree, for it was in the trunk of such tree that the creature named ki-sikil-lil-la-ke (translated as Lilith) had made its nest and the tree, named huluppu, is generally identified as a willow tree. In another account Lilith is also described forming the branches and further demons forming other parts of such tree.

Use this incense for general veneration of the dark goddess Lilith, in combination with the black mirror and scrying bowls and for other types of astral workings that aim at manifestations.

Note: There are 11 filled jars charged with the vibrations of this most auspicious date coinciding with the dark of the moon. They are available for purchase here and will also be listed in my Etsy online store.

Edit: all jars sold over night. More of this incense will be available after the next new moon, Friday, 11 December.