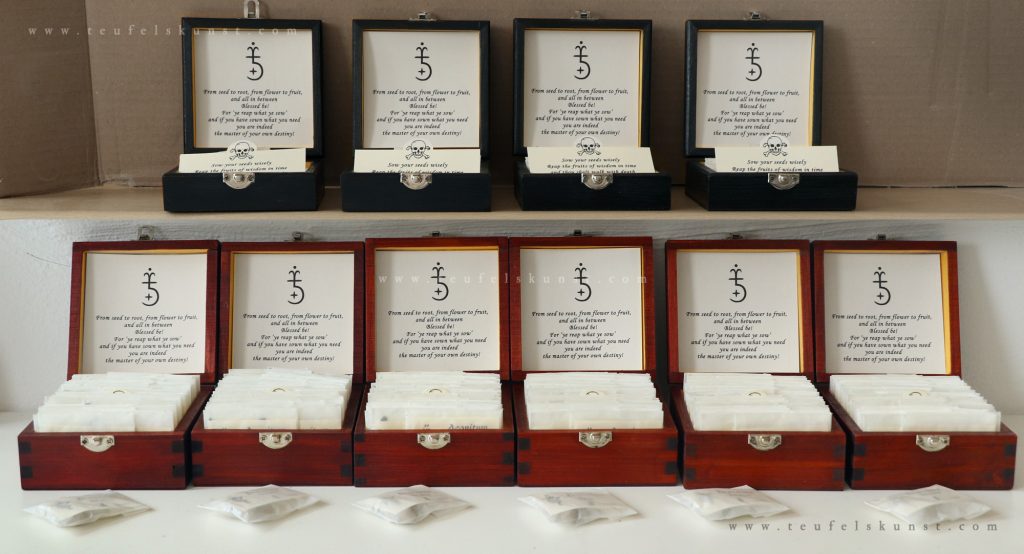 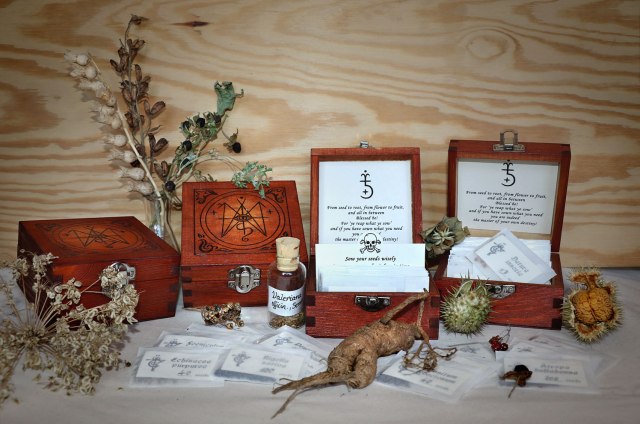 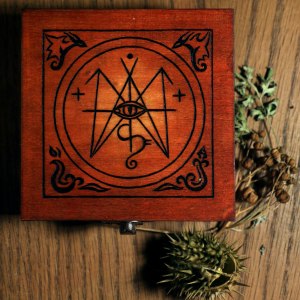 Good things come to those who wait. I have received many requests for new wooden seed boxes, but it was only during the past month that I was able to finish new boxes. So here they are: stained in the colors of fall and charged with the vibrations of the blood red moon, the boxes are filled with the year’s harvest of seeds coming from 50 different herbs.

The philosophy behind the boxes is to share the seeds, which I gather from my own witch garden, so that other practitioners may grow herbs from them as well. This means, we keep in touch, exchange experiences and compare our results with growing and sowing the herbs under different conditions. I am also giving advice here and on my garden blog, for growing and handling these herbs. Besides this the boxes also contain some seeds from new herbs, that I yet plan to sow and where I wish for others to join in.

Each box is pyrographed with the Teufelskunst Sigilum Maior/greater sowing seal on the cover and Sigilum Minor/lesser sowing seal on the inside. The boxes are stained in a warm red hue and finished with a thin layer of transparent varnish. There are THREE boxes filled with seeds (see the listing of the exact content here). The price for one box is 99 Euro + shipping.

Update: the boxes are SOLD

NOTE: I have been asked whether these boxes are also available without the seed content. If you would rather have an EMPTY BOX with the same or different decor, please contact me and we work something out!

We have expanded our Seed contingent and offer now seeds from over 50 different plants. As a special offer you can now buy a beautiful hand-branded and varnished wooden box containing seed-samples from over 40 plants we currently have in stock. Along with the box you also receive sowing instructions for each herb, illustrated with our unique plant seals. If you think that is just too much you can also get the wooden boxes in smaller size with seed samples from at least 22 different plants.

The same seeds can also be purchased with a sigil-adorned Cardboard-Box. Printed sowing instructions are included here as well.

*Only few available at a time

For more special offers check our Seeds Collections or view the A-Z list of available seeds including prices on single seed portions.

Note: Wooden boxes are currently sold, but new ones are on the way…